It’s really cool, how you can have fascinating chance encounters by being friendly and keeping an eye out.

Somewhere along the beaches of the Gold Coast, while hiking along the beaches, I came across a bunch of guys from Sydney, playing a game a beach cricket, and decided to join in.  Never having watched or played cricket before, I found it a really fun and fascinating game.  At its core, you have a batsman defending a post (a small tube stuck in the sand), and a pitcher throwing a ball at the batsman / post.  If the pitcher hits the post, the batsman is out.  Otherwise, the batsman gets to keep swinging at the ball until he connects – at which point he has to run to the pitcher and back to the post before somebody either catches the ball, or picks up the ball and pegs the post.

This being the beach, of course the dominant strategy is to hit the ball into the ocean.  I’ve no doubt the game is more complicated than I’ve described, but I had fun!  And I managed to score quite a few points too!

At another point along the Gold Coast, we had another chance encounter with a paraglider just before he flew into the air.  Apparently, he goes gliding three to five times a week!  We watched him glide around making figure eights for half an hour or so.  That’s one helluva hobby, going flying almost every day.  It doesn’t seem too hard either – you position the parachute correctly, wait for a breeze, pull, and up you go!  Landings must be tough, though. 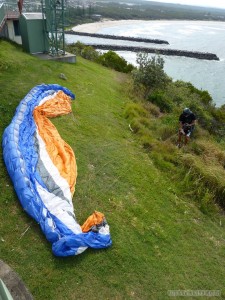 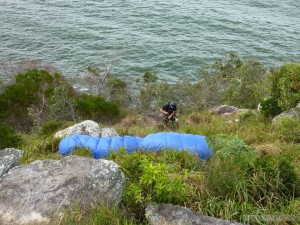 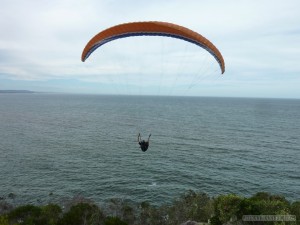 Finally, on another beach, I had another chance encounter with this fisherman out fishing – for sand worms!  He stands along the beach right where the waves reach, rubs a dead fish on a string along the and, and lures out these enormous two feet long worms, and catches them! 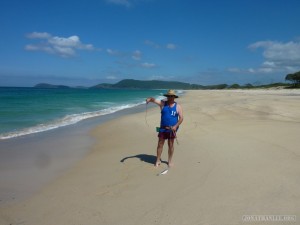 So he uses a dead fish to catch worms, and then uses the worms to catch more fish later.  There’s an odd synergy to it.