Australian football is a strange, fast paced sport that that strangely suits Australia.  While in Melbourne, I caught a game of footie, watching a game between Collingwood vs Hawthorn on 14 April 2013.  Admission was quite reasonable at $22, and the event was attended by 72,000 spectators.

A game that is only played in Australia, it’s a weird mix of American football and European football (soccer).  The ball is from American football, as are passing methods (throwing and punting), but other elements are from soccer – a large number of players with the same job (intercept the ball, pass to teammates, and score) but divided into defensive and offensive roles.

And like European football, it’s a very fast paced game, with action always going on and barely any downtime.  I’m sure a more seasoned fan can easily make sense of all the chaos, but to me, all I can see is the chaos – it’s a constant melee as the players fight over the ball, and judging by how the football bounces around so much, it’s gotta be greased.  Sometimes, you see a solid minute of the ball being fought over and fumbled before somebody gets a clean catch off!  I can’t help but laugh – but in the meantime, all the fans behind me are yelling and screaming for their favorite players to stop screwing up and catch the damn ball!

– At each end zone are three poles, creating three zones.  Six points are scored if the ball makes it through the middle zone, one point is scored for the side zones.  Amusingly, I think that the opposing team’s supporters often cheer for one-point goals? 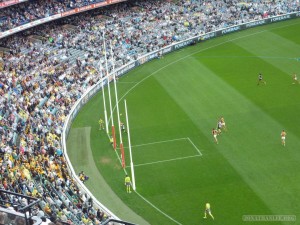 – And with each point scored, there are no cheerleaders, but each team has it’s own fans in the end zones waving pom poms and cheering: 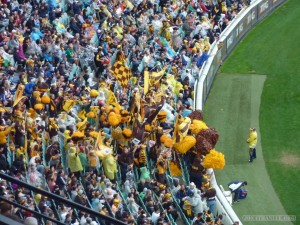 – With such a fast paced game, people get tired (and injured) easily – you constantly see injured and tired players substituting out.  Somehow, very Australian. 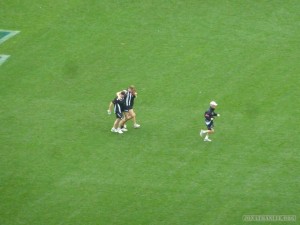 – During the mid-game break, young kids are invited to come onto the field and play.  Indoctrination of the young at its best! 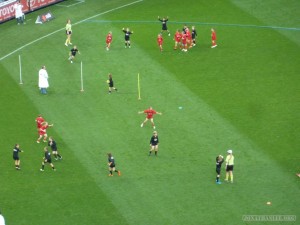 – There were these birds flying about the stadium all game.  I kept waiting for one of them to get nailed by a punted ball, but alas. 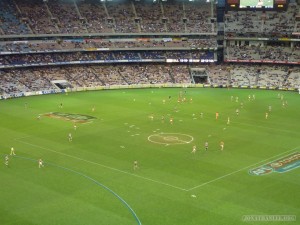 – Team paraphernalia seems to be mostly limited to jerseys, baseball caps, and scarves. Scarves were especially popular – I wonder why scarves are popular in Australia football but are nonexistent in American football?  Probably not a business opportunity.

– Needs more research: there seems to be quite a business opportunity in AFL (Australian football league) membership. Apparently, anybody can queue for membership, but it often takes more than a decade to get – and then the membership sells for an obscene amount?