During my time in the north island, I visited the town of Waitomo, famous for being the only place in New Zealand (and one of the few in the world) to have glowworm caves.  But of course, just seeing the glowworms would be rather dull, especially in a land with so many outdoor activities, so some inventive kiwis came up with a new sport – black water rafting.

The glowworm caves are actually caverns slowly carved out by underwater rivers, so somebody had the bright idea of rafting this underground river – so not only do you get to see the glowworms, but you also get the excitement of rafting!  Plus, the guide companies can charge a lot more for ‘black water rafting’ than just a ‘glow worm cave walk & tour’.  Clever.

Glowworms are insect larva that behave somewhat like spiders – they lay down a trap of sticky lines hanging down from the ceiling, start glowing – luminescent poop!  Fortunately the poop stays in the larva, and doesn’t drop down into the mouths of awestruck tourists.  This light attract insects that fly towards the false moon, the insects get caught in the sticky lines, and the glowworm enjoys a delicious meal. 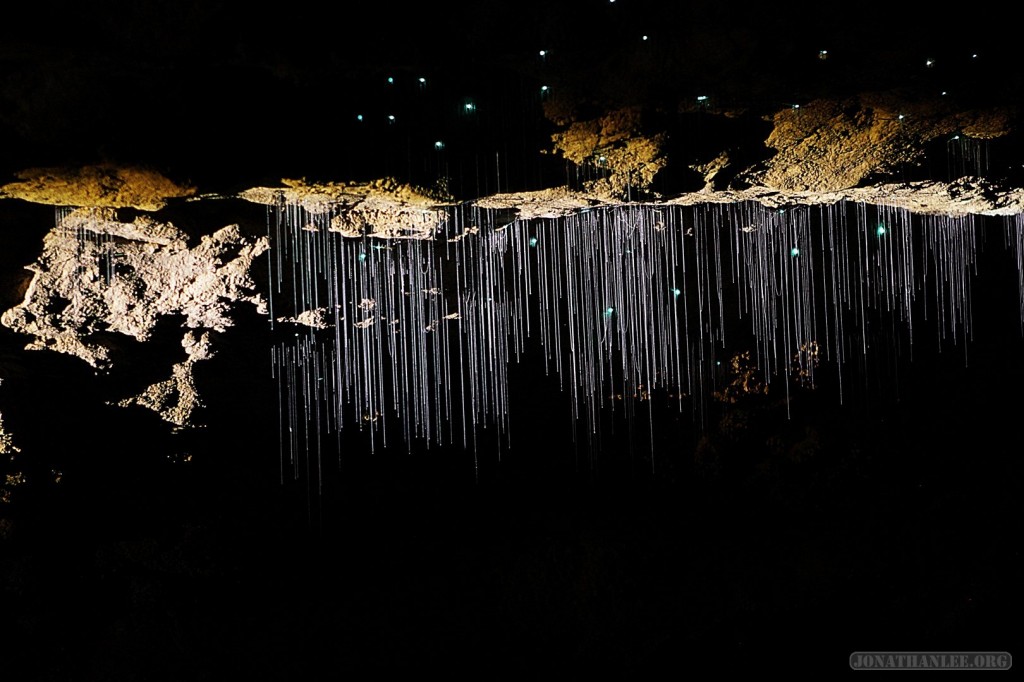 For black water rafting, everyone puts on a wetsuit and gumboots (“waterproof” boots), grabs a inflatable tube, and floats down the underwater river, laying back and seeing the glowworms do their thing (glow, duh.)  I could not bring my non-waterproof camera into the caves, so I to settle for buying a cd of pictures taken by the guide.

A professionally taken photo of the sticky glow worm lines: 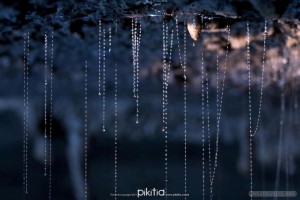 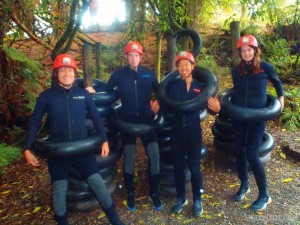 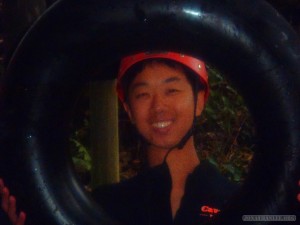 Why you’re in a cave, why not go caving?  In this part of the world, spelunking is called ‘caving’?  Crawling along a half-submerged passage, some kind of fish bit me on the finger, surprising me but not puncturing the skin.  And at the end of the passage, I found myself at the bottom of this nifty underground waterfall, and promptly tried the whole meditating-under-waterfall maneuver.  Holy crap, underground rivers are freezing – even with a wetsuit! 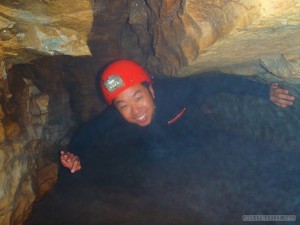 Floating along the underground river, whenever you lean back and turn off your headlamp (called ‘torches’ in this part of the world), you see all these glowworms, glowing on the ceiling.  It’s almost like looking at the starry sky — if all stars were the same size and brightness, and the same distance away, like the old Earth-is-the-center-of-the-universe theories.

It’s also like laying down in a completely dark bedroom, and looking at (uniformly sized) luminescent star stickers stuck to the roof.  Note to self: one day, when I have my own place again, get luminescent stickers, and apply them to make my bedroom resemble the constellations.

I swear that I saw a glowworm ‘constellation’ shaped like a heart. 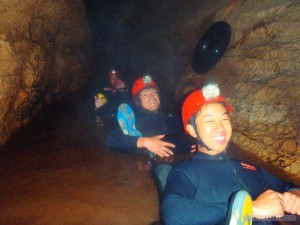 The aberration in the above photo isn’t an alien life form spying on our crazy humans – it’s the camera flash reflecting off of an inner tube.

Laying back in the almost complete darkness and watching the glowworms, a hundred meters beneath the surface, you almost feel this profound sense of tranquility – but then, you hear the dull roar of a waterfall in the distance, hear the guide tell you how you would soon be going over the waterfall backwards, and the fear sets in. 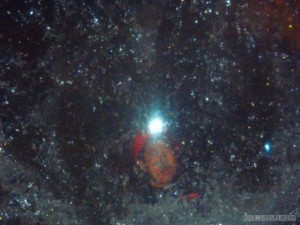 And of course, what kind of black water river ride would be complete without a water slide into the underground river? 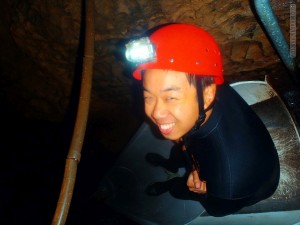 And finally, climbing back up the stairs into the light of the world above, and a much-needed hot shower. 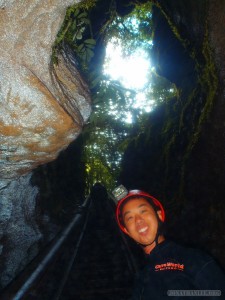