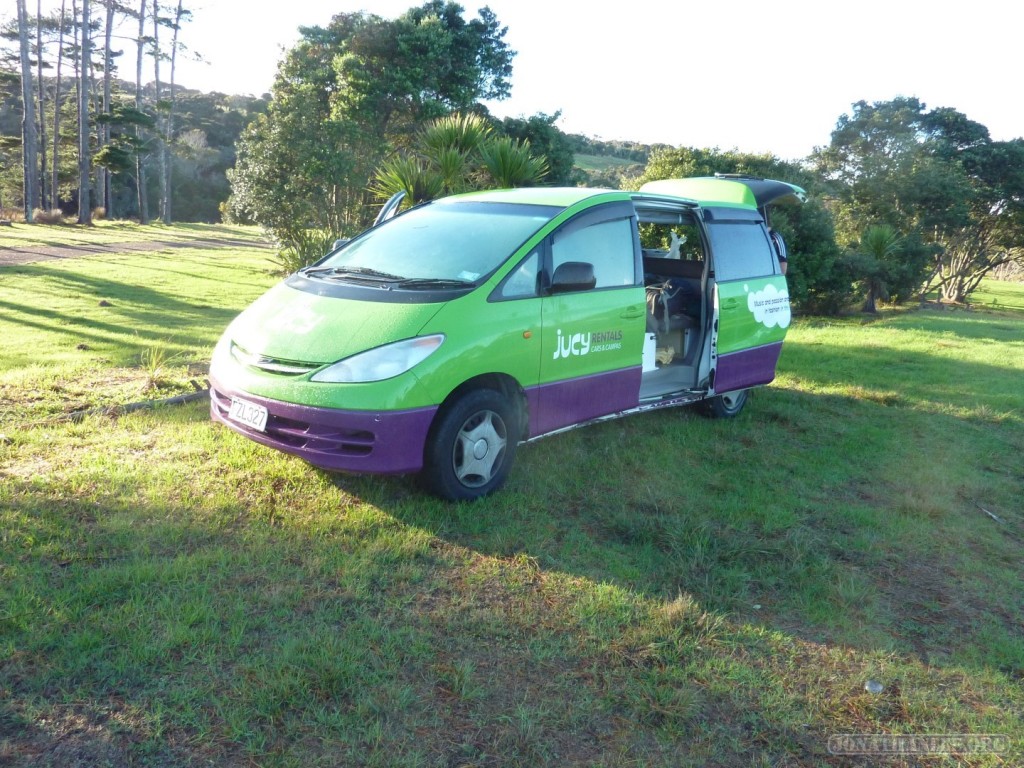 Traveling around New Zealand by campervan, especially during the low season, was quite a different experience from traveling in Australia. In Australia, I spent most of my time based in one major city or another, but in New Zealand, I spent all my time traveling around and seeing the country, accompanied by travel partner.

Sleeping:
With a campervan, sleeping is pretty simple – you pull over and park, hop into the back, and convert the back into a bed. In practice, it’s a bit more complicated – since New Zealand doesn’t want all of its roads and cities covered with campervans, you can only park in specially designated areas – or risk a hefty fine. Thankfully though, New Zealand has this thing called the Department of Conservation, which maintains hundreds of campgrounds around the country. Usually set 1-20 kilometers away from a main road, these doc camps offer some very basic facilities (usually just running water & toilets).

What’s really special about these doc sites though, is that they’re run by an honor system: you pull up, fill out a short form, and deposit the form and a $6 per person fee into an “honesty box”: 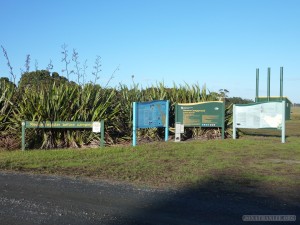 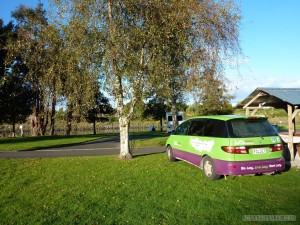 And it really is an honor system – in the ~15 nights that we camped at a doc site, we only had park rangers come and check fee payment once!

If I could make one suggestion, I’d ask the Department of Conservation to properly label its doc sites – on one memorable night, we drive an hour and 50 kilometers out of our way, in the pitch black darkness, up and down winding dirt roads, to find a doc site labeled as being just off the main road. On our way to the campsite, we stumbled across a lost cow: 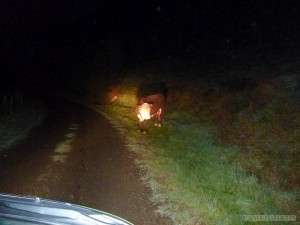 Here was our morning view from the campsite (we were the only ones there): 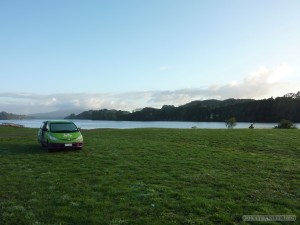 While the view from the campsite was pretty amazing, we definitely spent more in gas getting to the site than we saved in camping fees.

Oh, and the temperature. Let me tell you about the temperature. When I first started campervanning around New Zealand, the ambient temperature at night was pretty warm – maybe 10 degrees Celcius. However, towards the end of the trip, nighttime temperatures were regularly dropping to around zero degrees. When it’s cold enough for your windshield to frost up at night, it’s hard to get any sleep in a campervan with no heating: 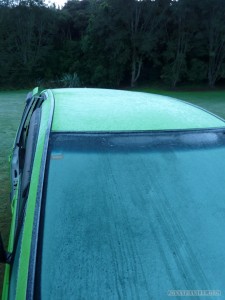 Excessive rain also prevented access to some doc sites – no way in hell I’m driving across this river! 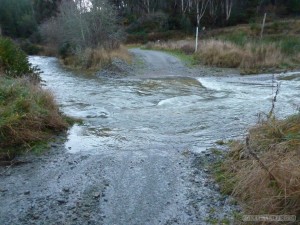 Food:
Pasta and sandwiches.  Every day, every night, every meal.  When my travel partner and I agreed to travel together, it made sense to divide up responsibilities – I would drive, he would cook.  He’s not a very good cook.  And so, pasta and sandwiches.

On one particularly memorable night, we were out of sandwiches, and it was too windy to cook (our stove is mounted on the back of the campervan, unprotected from the elements), so we ended up having granola bars, (cold) baked beans, and (cold) canned salmon for dinner.  Five star cuisine right there.

The Campervan:
We went with a Jucy campervan, but there were a whole bunch of other companies renting in New Zealand.  I especially liked the design of the Escape campervans: 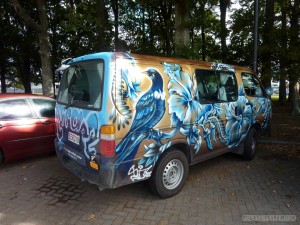 The Stars:
Amazingly, you can get a pretty good view of the stars from New Zealand – just about as great as when I was sailing off the coast of Australia.  On April 28, 2013, I saw my first shooting star!  Unfortunately, I was too surprised to make a wish.  I tried taking a picture of the stars by laying my camera down on the ground and setting my shutter for a 60-second exposure, but it didn’t work too well: 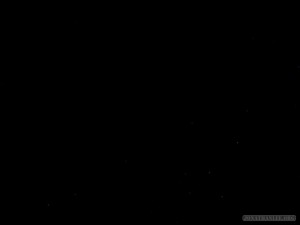 If you zoom in, you can see a couple (very) faint dots of white here and there.  Why does my camera have a “starry skies” mode if it doesn’t actually work?

Road Sharing:
Especially in the south island of New Zealand, it was not uncommon to share the road with a herd of sheep or cows: 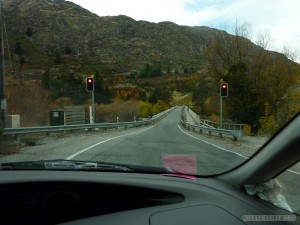 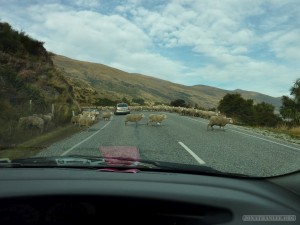 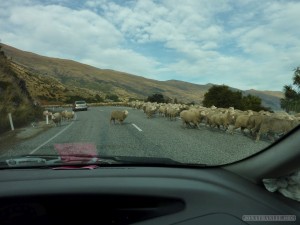 Driving through a flock of sheep or cows is tricky business – you have to drive slowly but surely.  If you keep driving, the livestock will part like the red sea and go around around you, but once you stop, they just stop and linger around you, refusing to move on.

I feel like such a city slicker for saying this, but it’s true – cows do moo, and sheep do baa.  Driving through the flock, you hear moos and baas of all tones, from low bass-like moos and baas to high-pitched panicked moos and baas.  I don’t know why, but every time I drove through a flock of sheep or cows, it put a smile on my face. 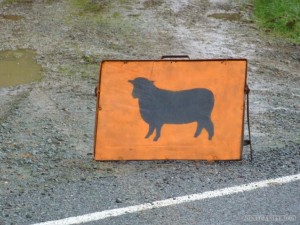 The Roads:
The roads of New Zealand are actually really great – I didn’t see a single pothole on the paved roads.  The gravel roads, however, are a different story – I swear that they’re designed for maximum aggravation, with so many bumps and ridges that you cannot drive with any speed, or risk damaging the underside of your car.

I also noticed that New Zealand has this love affair with not only roundabouts (understandable – roundabouts are pretty awesome, I didn’t see a single traffic light outside of major cities), but also with one-way bridges.  I swear, you couldn’t drive more than hour without crossing a one-way bridge:

While this is a decently sized one way bridge, others were only a couple meters in length! 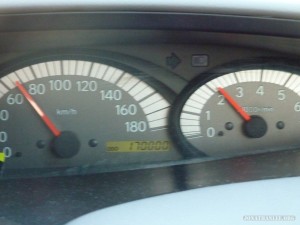