After finishing my tour of Saigon and the Mekong Delta in southern Vietnam, I traveled north to the old city of Hoi An, in the center of Vietnam. And it’s a very beautiful city, but extraordinarily touristy, a prime example of Disneyfication. In the old quarter, the architecture and ambiance is amazing, but every single building and business caters to the tourists who descend upon this city. Clothing stores, souvenir stores, bars, restaurants, tailors, and art galleries. Everywhere.  But quite picturesque. 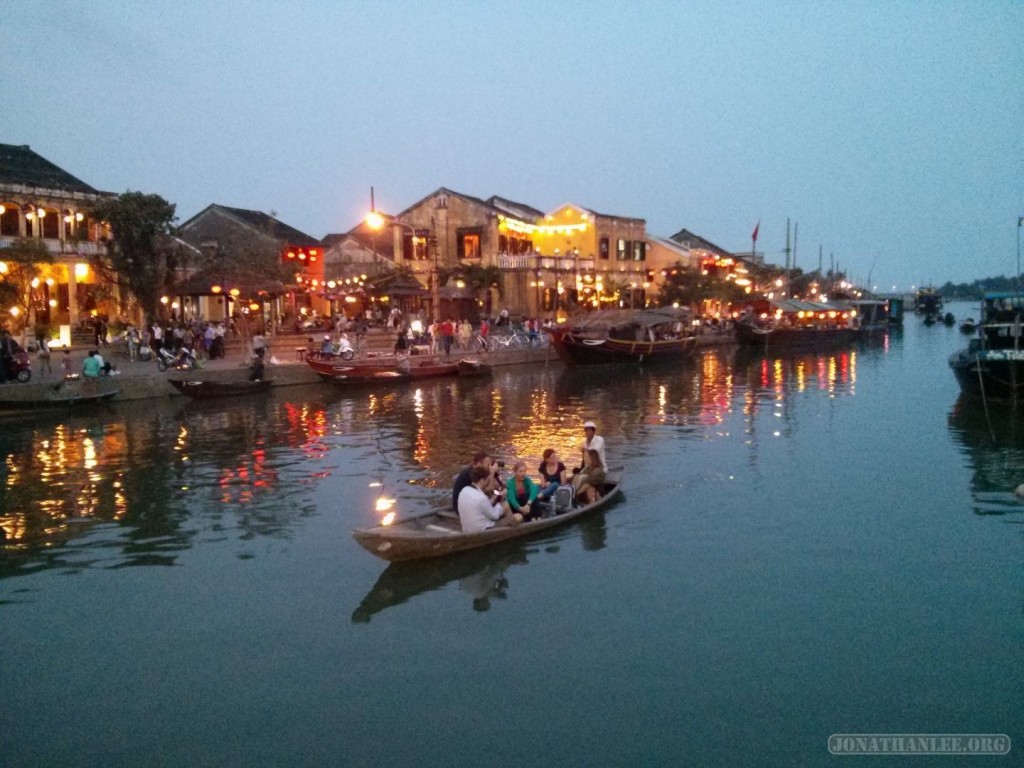 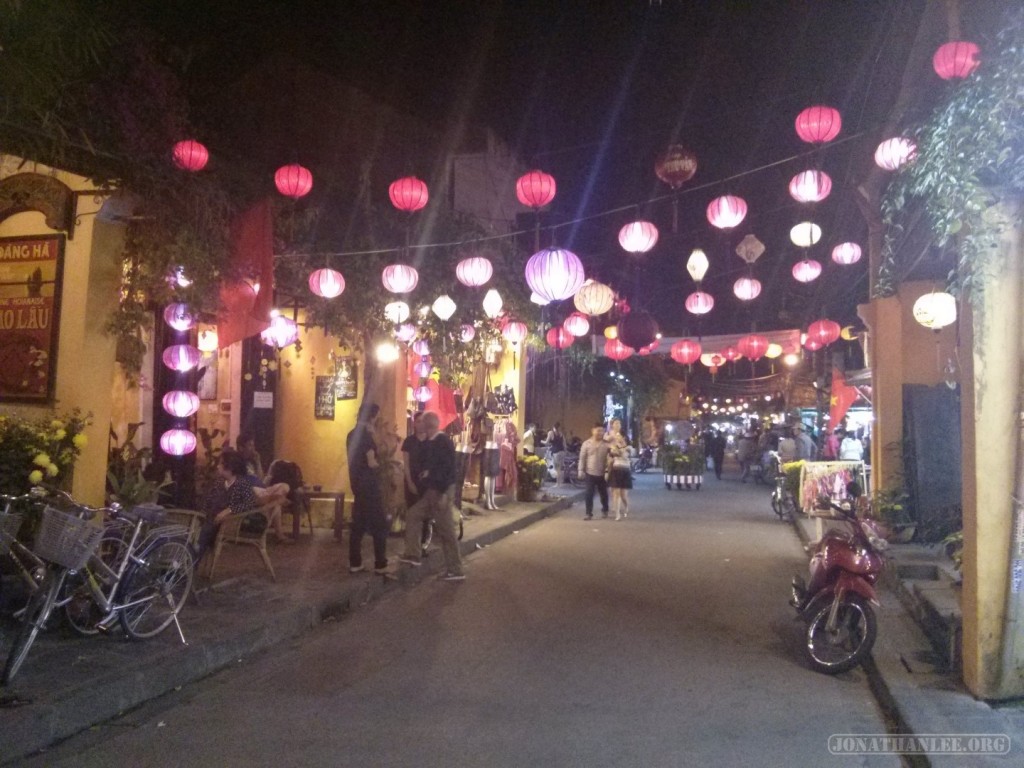 Olden-style buildings, and Chinese lanterns. That basically sums up Hoi An.

Plus all the restaurants, tailors, souvenir stores, and art galleries, of course. 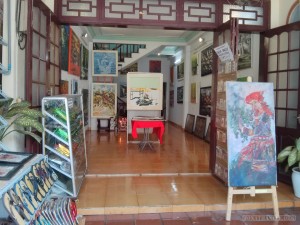 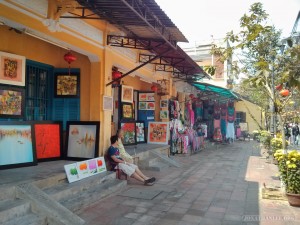 It seemed like everyone was getting some tailoring done in Hoi An – getting a suit, some dress shirts, some leather shoes.  After all, it’s so cheap!  Quality garments at less than the half the price in the West.  It took all my willpower to not go for any tailoring myself.  As I see it, yes, it’s an amazing bargain.  However, if I don’t need (and can’t carry) new tailored clothing, it’s not worth it no matter how cheap it is.  That’s what I keep telling myself.

Not that it’s not picturesque, but that’s about all there is to see here. 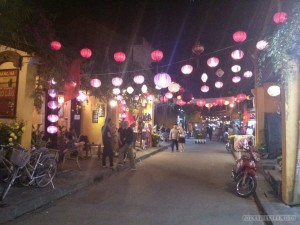 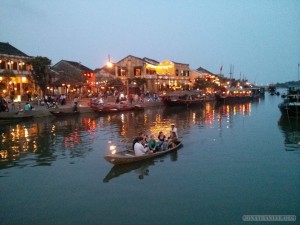 Pretty good views at night though. 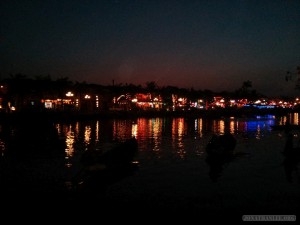 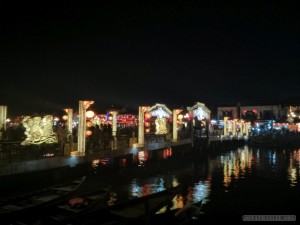 The view at sunset is also very nice: 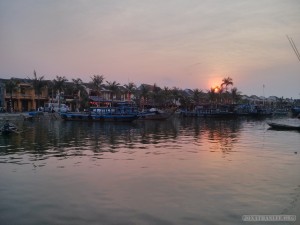 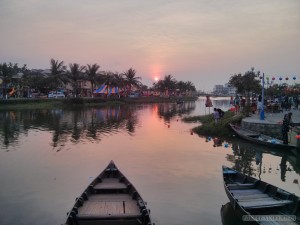 In terms of places to visit, Hoi An claims to have a lot of historical buildings, but it basically boils down to Chinese-style temples.

There’s also a… Japanese bridge? I’m not sure how it’s Japanese, or even that interesting. 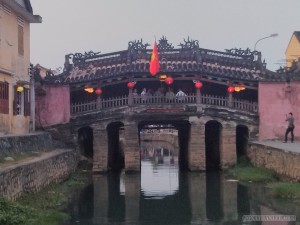 Once night approaches, all these vendors appear and sell lanterns – for 50 cents each, you can make a wish, light a candle, and watch the lanterns float about the river. 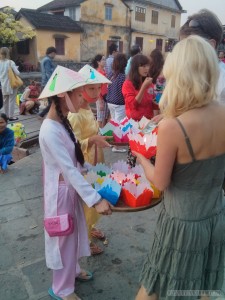 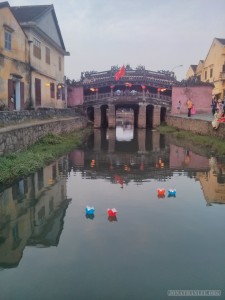 While I wasn’t a big fan of Hoi An itself, I greatly enjoyed renting a bicycle and biking around the outskirts. I’d even venture to say that the outskirts of are its only redeeming feature. You get this really peaceful feeling, slowly biking through the villages and outskirts on the outskirts of Hoi An. 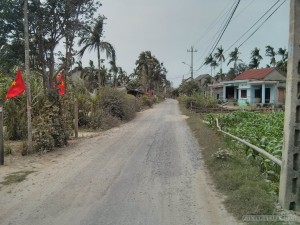 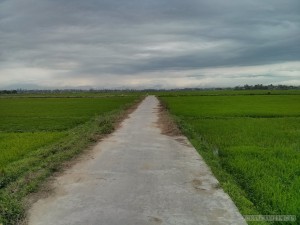 The rice fields are especially nice – these photos totally don’t do it justice. In the song ‘America the Beautiful’, there’s this phrase – “amber waves of grain”. I went biking on a particularly windy day (even with a kickstand deployed, the wind kept blowing over my bike), and experienced the “verdant waves of rice”. On a thin bike path, surrounded on three sides by rice fields, I see the wind billowing through the rice fields. There are no words beautiful enough to convey the sense of peace, the sense of wonder, the sense of tranquility.

Even away from the rice fields and the beaches, in areas where there’s not much to see, biking around the countryside is an amazing experience – it’s just so peaceful, so tranquil. Randomly biking around, you see the natural beauty of rural Vietnam, even in the bridges, the incomplete buildings, the lagoons, the fishing enclosures.

Also, a pig sty. The first pig sty I’ve ever seen. The pigs were adorable. 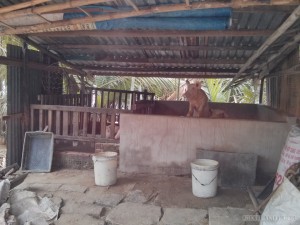 While biking around, I stumbled across a cemetery, which seems to be the Vietnamese equivalent of Arlington National Cemetery (America’s most hallowed ceremony, where veterans and casualties of America’s wars are interred). I think? 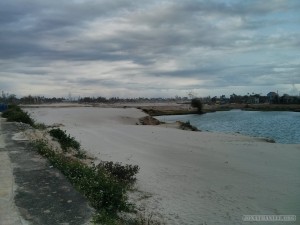 Hoi An has its own special foods, which I found to be decent but unremarkable:
– Cau Lau: stir fried noodles 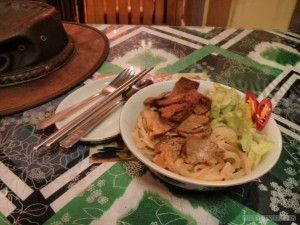 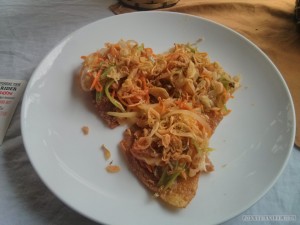 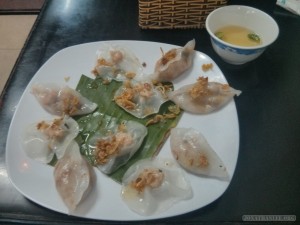 – Com ga: chicken with rice. Not a specialty, but absolutely delicious. 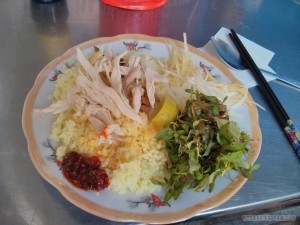 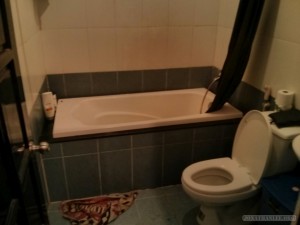 All in all, Hoi An was decent – as long as you stay away from the Disneyficated city center. 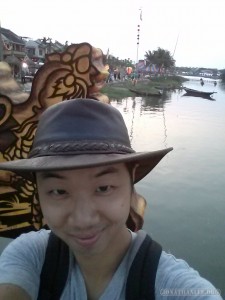