After crossing from Thailand into Laos (from Chiang Rai to border town Chiang Khong, then crossing to border town Huay Xai), I took the famous (and infamous) slow boat from Huay Xai to Luang Prabang.    Spanning two days and 300 kilometers, the slow boat is a meandering ride down the Mekong.  Depending on the clientele, you can have two types of boats – the typical backpacker ‘party’ boat, and the more serene, relaxing boat.  Thankfully, I ended up on the relaxed boat, and read my way down the river.

Getting into Laos itself is an interesting experience.  From Chiang Rai (reachable by bus from Chiang Mai), you take a bus to Chiang Khong, and then a tuktuk to the border crossing.  After getting processed out of Thailand (hassle-free), you have to take a 2-minutes bus ride (costing a dollar) across the friendship bridge across the Mekong, to the Laos border check.  There, you get the pay the standard border crossing fees (in new US dollar bills only!), paying a $2 bribe for wanting to cross the border after 5pm, on a weekend.  Ick. 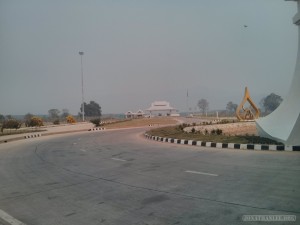 Huay Xai itself is actually a pretty nice town, all things considered, but it’s tiny compared to anything in Thailand, and there’s not much going on.  Most tourist come for only a day or two, before either crossing the border to Thailand, or heading deep into Laos to Luang Prabang. 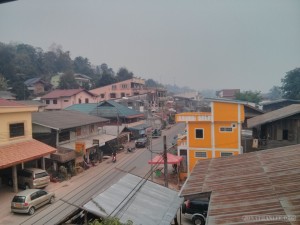 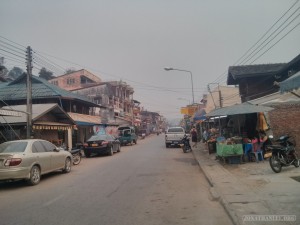 It almost seemed like the town was only important as a transit hub, housing tourists while they moved between Thailand and Luang Prabang.  It was a bit foggy during my stay, but the town had some decent views, as well as decent (but somewhat pricey by SE Asian standards) food. 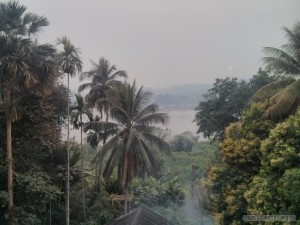 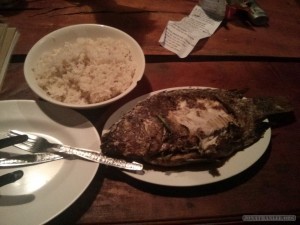 So I just stayed for one night, before hopping on one of these slow boats the next morning! 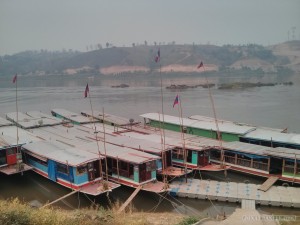 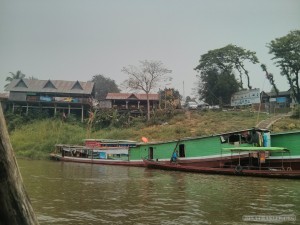 The boat itself is not terribly complicated – a long boat, like a houseboat, filled with chairs, which are in turn filled with tourists.  There are some locals on the boat (and I’m pretty sure they get preferential pricing), but at least 90% were tourists.

And so, the boat ride!  Basically, you sit on the boat for 8 hours per day, stuck with your fellow travelers.  There’s a small shop selling overpriced snacks and beer on the boat, allowing the party boat to rock on indefinitely, but since I was on the chill boat, I just sat, read my Kindle (I finished the Three Musketeers, and it was GOOD), and enjoyed the scenery.  A pity then, that the weather was somewhat foggy on the first day.

A night was spent in a pretty nondescript called Pakbeng, which is truly only notable as a transit hub between Huay Xai and Luang Prabang.  Seriously, there was nothing but guesthouses and overpriced restaurants here!  Still, nice sunset views: 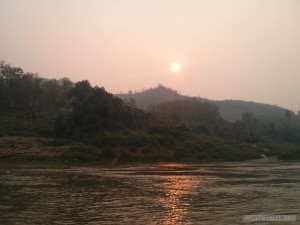 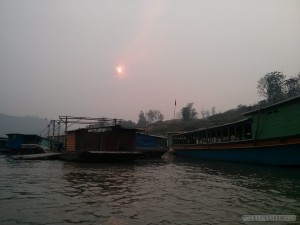 The morning views from Pakbeng, as I waited to board the boats for the second day, were also quite nice.

The second day’s boat ride was much like the first – sitting on the boat, reading my Kindle, and just enjoying the ambiance.  Since my boat was the non-party boat, all the drunk backpackers moved over to the other boat, where they reportedly had a grand old party.  Halfway to Luang Prabang, we had to stop and wait for the other boat, so that we could pass their mini-shop our beer supply!

The views on the second day were much nicer, as the fog cleared up:

Stopping along the shore for some locals to get off with some shopping: 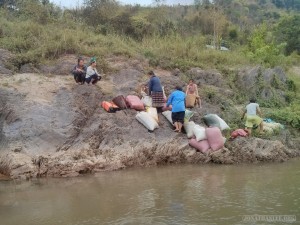 And finally, after two days of tranquility (and even boredom) on the slow boat, we arrive in Luang Prabang!  Or at least, the slow boat pier of Luang Prabang, set a couple of kilometers away from the city, so that the tuktuk drivers can charge us a couple of dollars each for a ride to the city.  Seriously!  Supposedly the boat pier used to be right in the city, but they moved it out so that the tuktuk drivers could make more money off of all the tourists. 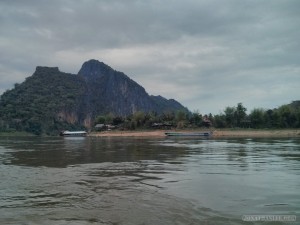 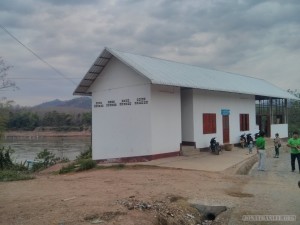 One thought on “Travelogue: Slow Boat from Huay Xai to Luang Prabang”