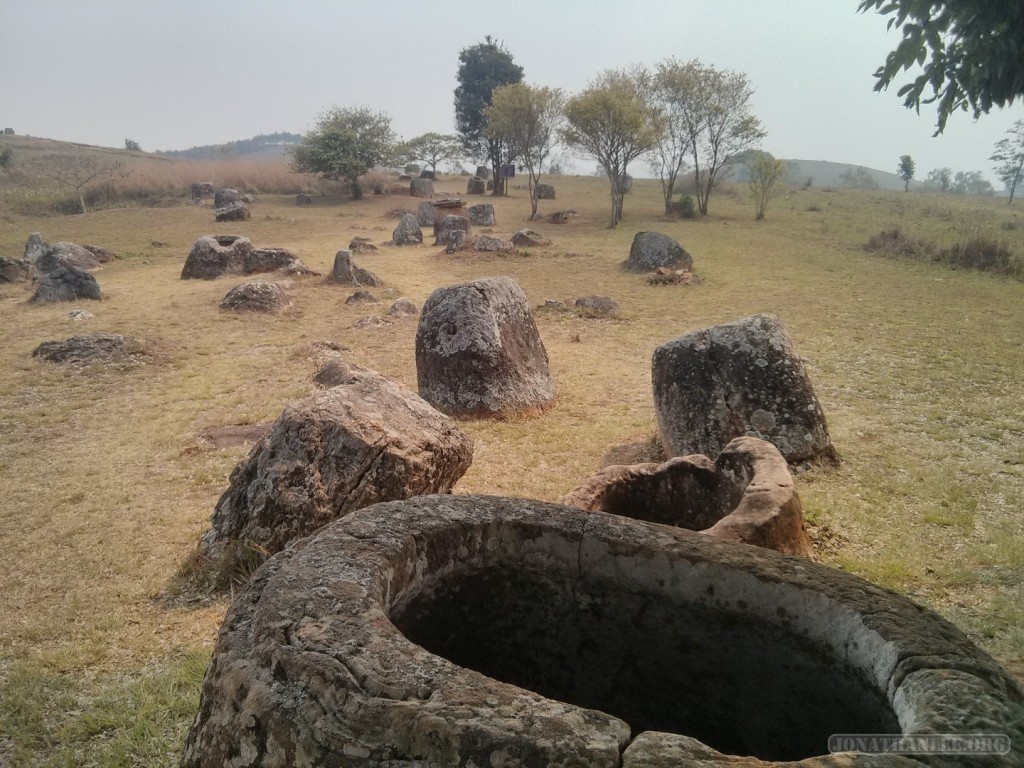 Along the road from Luang Prabang, you have some very nice views of the Laos countryside – the entire country is ridiculously hilly!  It makes for a very bumpy and winding 8 hour ride, causing a lot of motion sickness.  I wondered though, even though the view was amazing, how much of the scenery was pristine because it was polluted with unexploded ordnance?

The town of Phonsavan itself is quite nice – a decently sized town, with some accommodations and restaurants for tourists, but not overwhelmed with tourists.  It’s a bit off the beaten path. 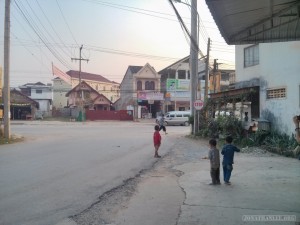 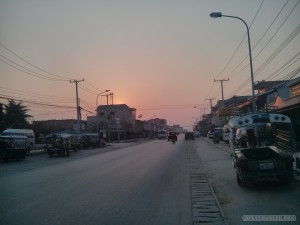 Food was good: here is some chicken noodle soup, and a dish called ‘latna’: 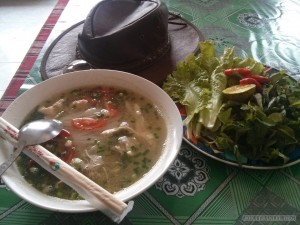 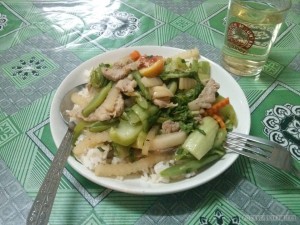 I particularly enjoyed the market of Phonsavan – very local, very big, and very diverse.  Check out all these knives for sale! 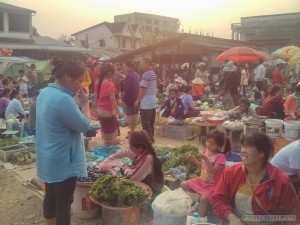 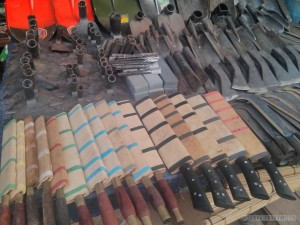 These are chicken baskets, and pig baskets, respectively.  The chickens seem to be fine, but I feel rather bad for the pigs, cooped up and unable to move at all.  Yes, there are pigs in each of those individually-sized baskets to the right.  PETA would probably have a fit. 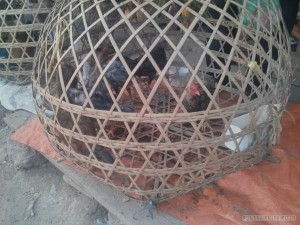 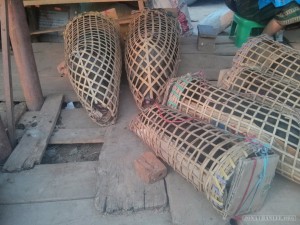 Other sights in Phonsavan:
– The Laos War Memorial (closed during my visit, so I couldn’t tell you what it was memorializing): 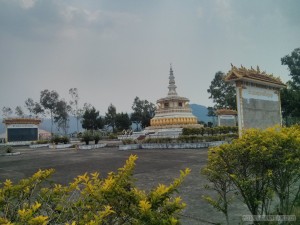 – The SOS children’s school, for poor children and orphans?  They weren’t seeking donations or even want me wandering around, as opposed to all the scam orphanages, so they seemed legit: 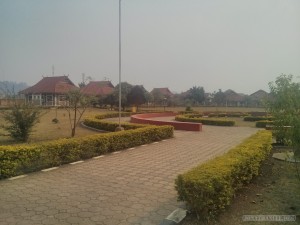 – There’s also this phenomenon, which I’ve noticed both here and in Luang Prabang – the lottery ticket sellers.  Late afternoon, a bit before the sun goes down, enterprising individuals set up small stands and tables along the roads, and sell lottery tickets.  *shrug* 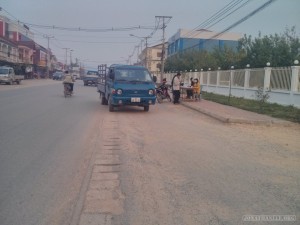 So overall, Phonsavan is pretty nice.  But there was one major problem, the dust.  I’ve always been somewhat allergic to dust and dust mites, which cause my eyes to become irritated, my nose to water, and my entire body to feel bleh.  In my year of traveling, I didn’t have any problems at all, but then I got to Phonsavan.  And unfortunately, Phonsavan is built right along a major road through Laos, so trucks are rumbling through at all hours, stirring up all sorts of dust.   And so, I could only stay in Phonsavan for two nights, before allergies drove me away.   But before I left, I rented myself a bike, and visited the Field of Jars!

On a side note, I found it absolutely impossible to rent a proper mountain bike, or even any bike with gears!  The entire town only had single-gear town bikes.  At least the view biking out from town was pretty good – though biking up hills on a single-gear is somewhat unfortunate.

And then, the Field of Jars! 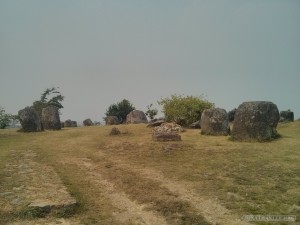 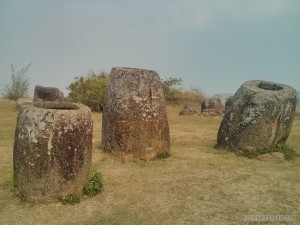 Basically, it’s a huge field, filled with ancient jars, and nobody knows for sure what their original purpose was.  You’ve got large jars, and you’ve got small jars.  Hat for scale. 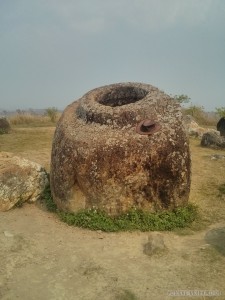 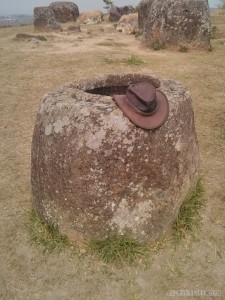 You’ve got topped jars, and you’ve got broken jars. 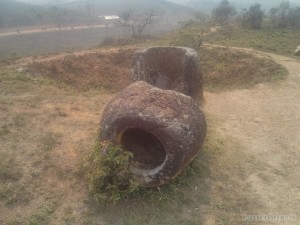 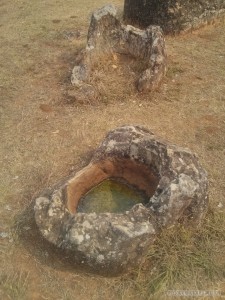 Honestly, that’s pretty much there is to the Field of Jars.  A huge field of jars.

There were a couple other curiosities at the Field of Jars:
– A huge aloe plant, with lots of names carved in: 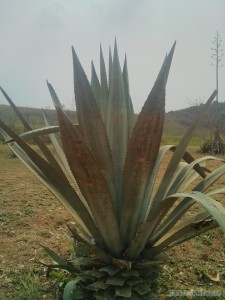 – The selling of ‘silver’ spoons, utensils, and toys from downed US airplanes.  Apparently this is a thing – metal from downed US planes would be melted down into spoons and other useful tools!  Symbolic, too – weapons of war turned into utensils of peace.  Swords to ploughshares. 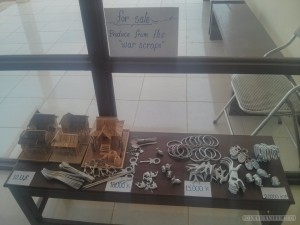 – A bomb crater!  A good number of Jars on the Field of Jars were thus destroyed. 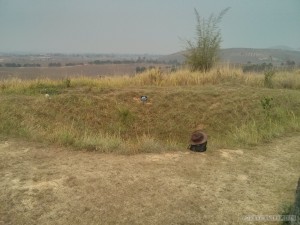 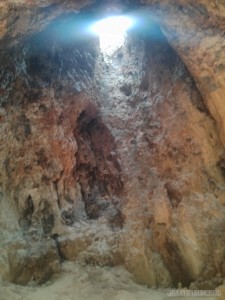 – You’ve got to walk between these UXO markers, to make sure you don’t step on a landmine.  Not scary at all. 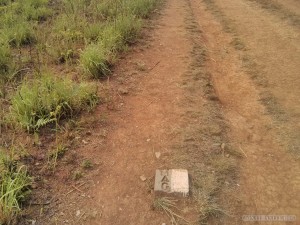 – When you stare into the jar, the jar also stares into you. 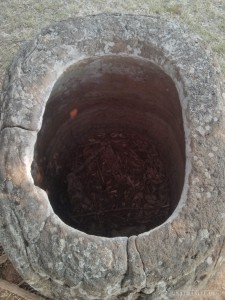 One thought on “Travelogue: Phonsavan and the Field of Jars”