Angkor Archaeological Park! Angkor Wat! Angkor Thom! Bayon! If not for Angkor Park, Siem Reap would be utterly devoid of tourists. But as it is, every day a phalanx of tourists descend upon the park, and it’s probably one of Cambodia’s greatest sources of income ($20 per person per day for an access permit!) Many people choose to do Angkor Park slowly, over the course of a couple of days, but I chose to do a grand one-day tour, from sunrise to sunset, and visiting all the most famous temples of Angkor Archaeological Park. 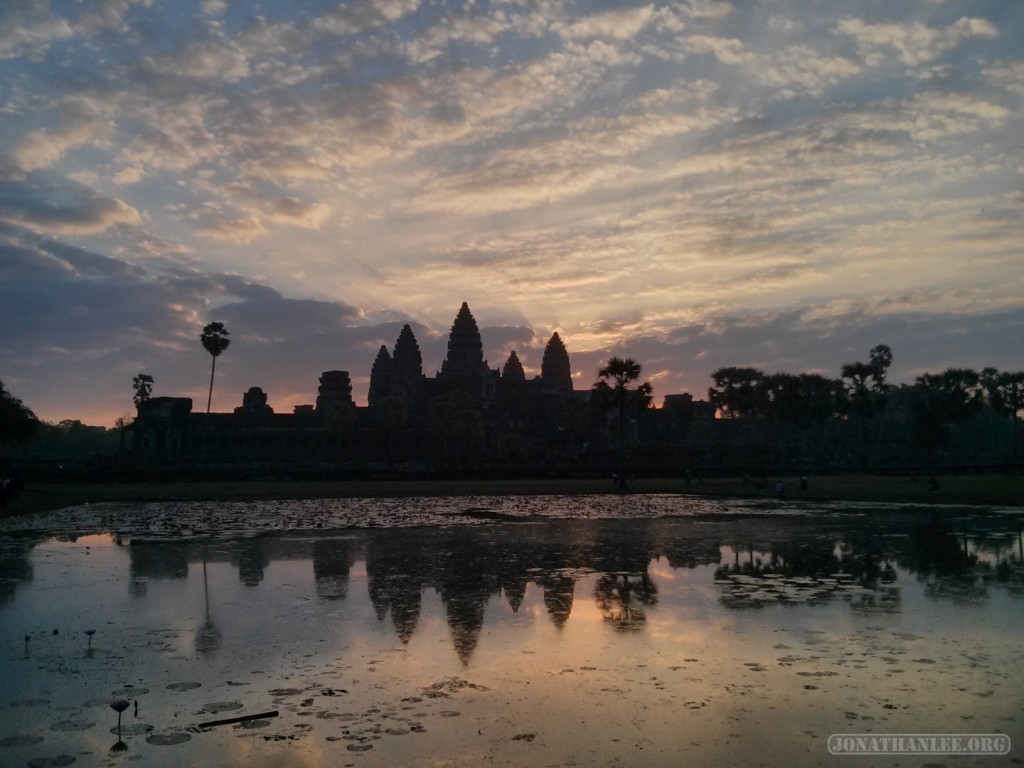 To watch the sunrise over Angkor Wat, we (me + 3 other crazy people I looped into this) woke up at 4 AM, chartered a tuktuk for the day, and set off! 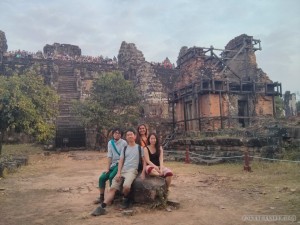 The weather was a bit cloudy that day, so we didn’t get to catch the perfect sunrise, but it was still pretty good:

There was a ridiculous number of tourists at Angkor Wat for the sunrise, making it quite difficult to take photos: 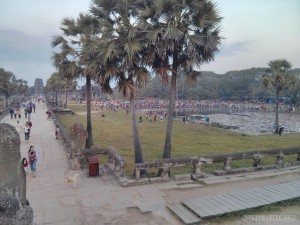 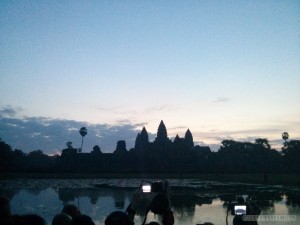 After seeing the sunrise at Angkor Wat, we started heading north to Angkor Thom (we’d double back and finish our tour at Angkor Wat), stopping at the South Gate:

We saw a very scary monkey:

Thankfully, the roads of Angkor Archaeological Park are quite good – though quite dusty after a long line of tuktuks, busses, and vans have passed through: 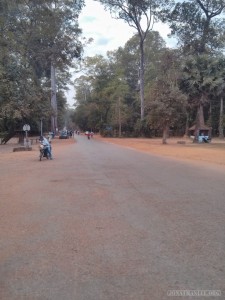 In Angkor Thom, we visited Bayon:

Notable of Bayon was the north Library, completely restored by the archaeological teams! 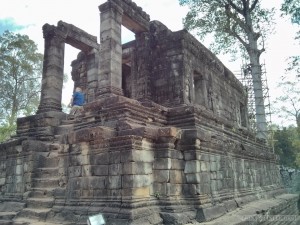 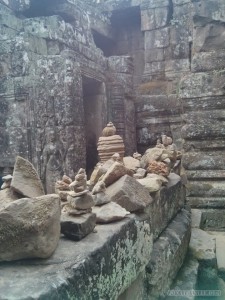 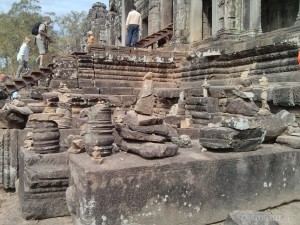 Oh, did I mention the elephants?  There were elephants, and accompanying elephant rides: 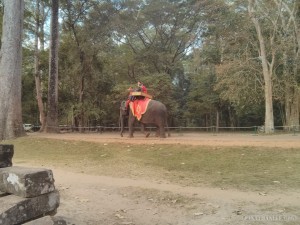 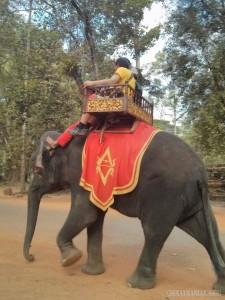 Terrace of the Elephants:

Terrace of the Leper King:

Upon finishing these, we headed out east of Angkor Thom, visiting Thommanon: 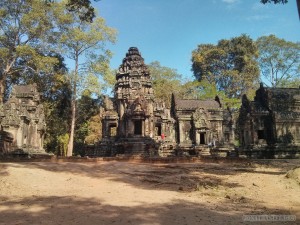 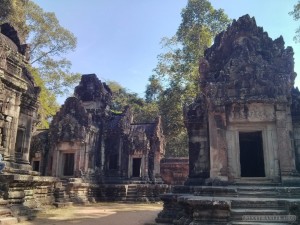 There were a lot of beheaded Buddhas at Thommanon, as well as other temples.  The Cambodian people seem to blame the Vietnamese / Thai: 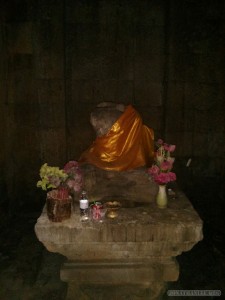 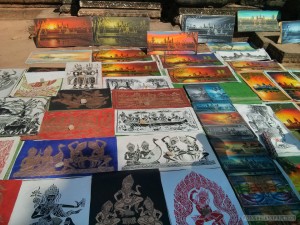 Ta Keo also has an active (?) excavation going on: 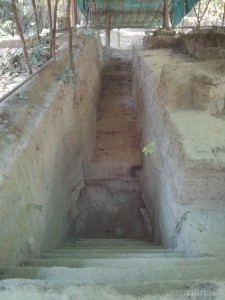 Ta Prohm, the post-apocalyptic temple, overgrown with all sorts of trees:

After Ta Prohm, I wondered, if this sort of thing happened to Ta Prohm, what’ll happy to this age’s iconic landmarks in another 500 years?  Will the Statue of Liberty still be standing?  Will it still be recognizable?  Will only parts of it still be around?

They also had a neat display, of the restoration of parts of Prohm: 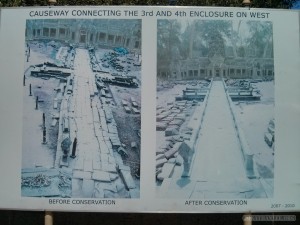 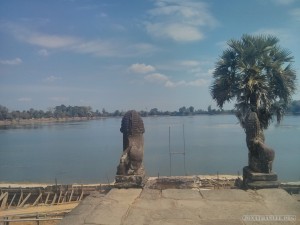 Pre Rup, which reminds me of Prambanan in Indonesia:

Browsing through Preah Khan, I wondered – is Angkor Wat only so well known because it is so well preserved?  After all, temples such as Preah Khan are almost as big and grand as Angkor Wat.

Next, back to Angkor Wat to properly explore the temple!

What struck me when walking around Angkor Wat, is how BIG it is.  From the front, there are the seven iconic spires, and they look pretty huge.  What’s not immediately obvious is that it isn’t just a facade – Angkor Wat is indeed enormous! 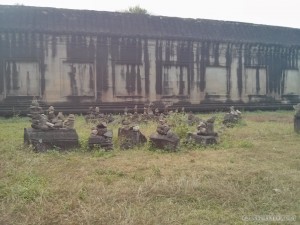 There’s also a ton of carvings at Angkor Wat:

Angkor Wat has a third level, only available via a steep climb up and down: 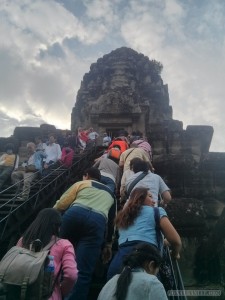 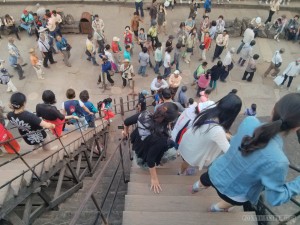 Unfortunately, it’s got quite the line, especially since so many of the tourists to Angkor Wat are senior citizens who finally saved up enough to travel… 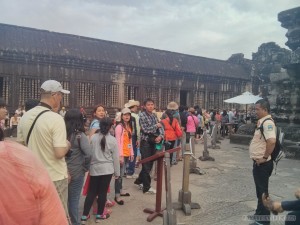 The views at the top?  They are pretty good:

And finally, to Phnom Bakheng: 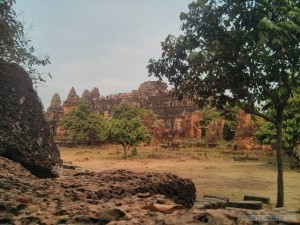 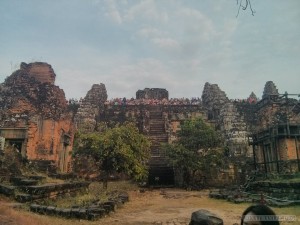 The sunset was amongst the most ‘meh’ I’ve seen:

Bits and bobs:
– Introducing Sayaka, my travel companion for Angkor Wat.  I took and really liked these photos!