Kep, a peaceful beach town half an hour away from Kampot, made for a fun day trip. It’s a town where you can do nothing, and have a great time doing so. I spent maybe 6 hours in here, walking around enjoying the sights and foods. 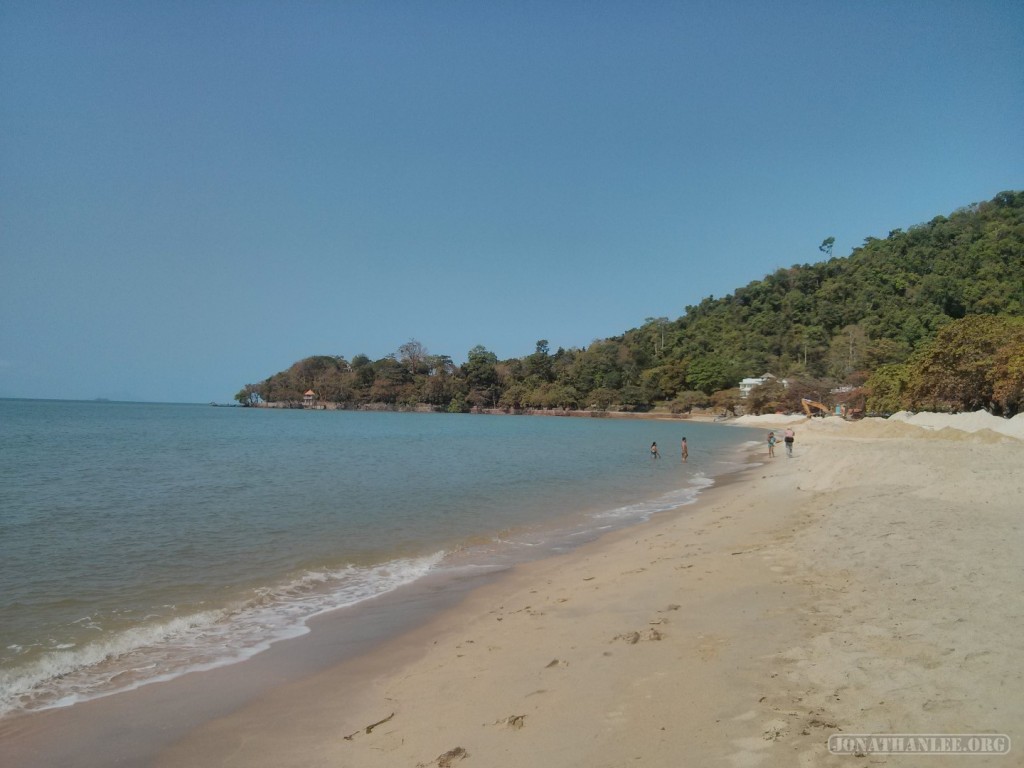 The primary draw of Kep is its crab market, said to be the best in all of Cambodia. I don’t doubt that’s true, but since Cambodia isn’t known for its seafood, I’m unsure if that compliment means anything. But in any case, about twenty minutes’ walk from town center, you’ve got the local crab market: 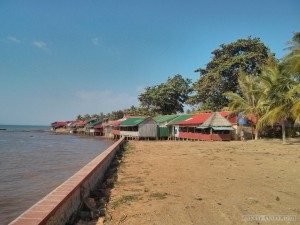 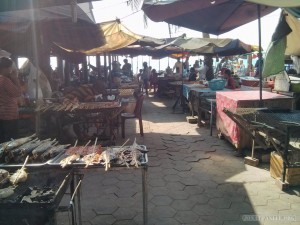 I picked a nice restaurant (Kimly Restaurant) overlooking the ocean, famous for its crabs. 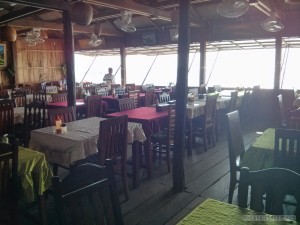 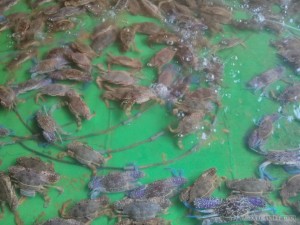 Freshly caught crab, cooked with fresh Kampot peppercorn. Before and after: 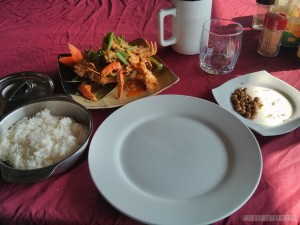 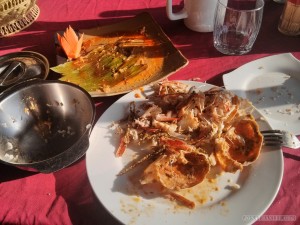 The peppercorns were quite interesting. Usually, when you eat pepper, even freshly ground pepper, you use dried peppercorns – usually black or white. This was my first time having fresh peppercorns, and green ones at that. It’s a feast for the taste buds. While the larger (older?) peppercorns have more of a classic pepper taste (albeit milder), the smaller (younger?) peppercorns are savory, almost sweet. Mixed with the crab sauce, I could almost eat the peppercorns just by themselves! 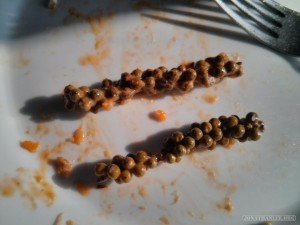 After having my fill of crab, I walked around Kep for a bit, enjoying the sights, and found that the beaches are quite nice too, though rather smaller: 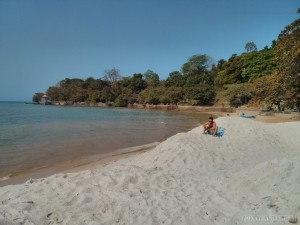 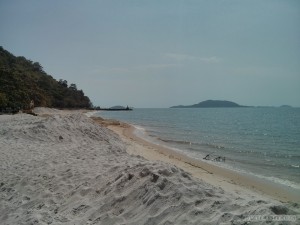 Give it another couple weeks though, and the beaches will be a lot larger and nicer. While I was visiting, I saw truckloads of beach sand arrive, shipped from Sihanoukville, to create a bigger beach.  It’s somewhat strange, seeing bulldozers building a beach. 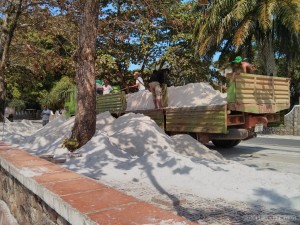 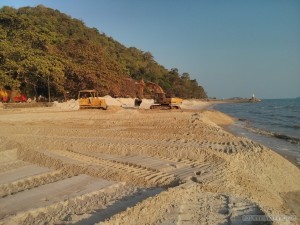 I’ve got mixed feelings about this. Sure, a larger beach would probably attract more tourists, but it might also destroy the essence of Kep. With a huge influx of tourists, it might become just another Sihanoukville – full of drugs and partying.

On the other hand, I can see why the locals would want to make the town more attractive to tourists, even the party and drugs type – because it brings in money!  It’s hard to say to somebody that they should remain poor to preserve the unmarred and unspoiled culture.  If you make that argument, you’re basically following the footsteps of the Khmer Rouge, who argued that uneducated villagers were ‘pure’ and ‘innocent’, whereas educated people and those who lived in towns were corrupted by the West and had to be re-educated.

At least while I visited, it was calm, peaceful, friendly, and quite enjoyable.

Oh!  And while I was in Kep, I joined some locals for a pick up game of sepak takraw – you get some friends, stand around in a rough circle, and kick around a cross between a ball and a badminton bird, keeping it in the air with your feet, hands, and headbutts.  It’s surprisingly hard, but quite fun!  I didn’t speak a word of Cambodian, and the locals didn’t speak a word of English, but we still managed to enjoy ourselves. 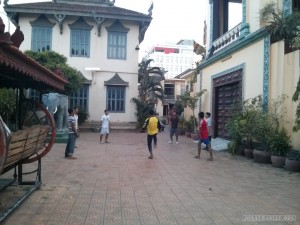 Hammocks along the beach! 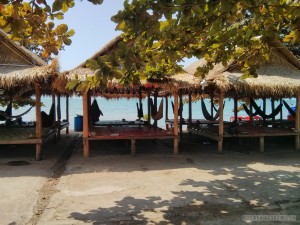 And of course, no beach is complete with people hawking shell-based arts: 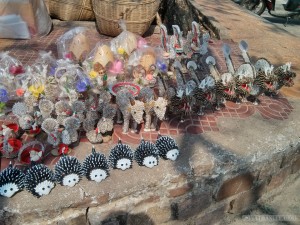 Sights along the coastline:
– I have no idea what to call this – a public rest area off the coast?  A relaxation pier? 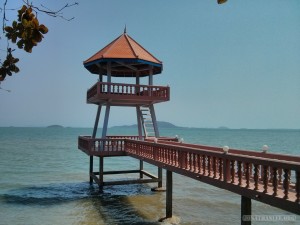 – Fishing boats, taking a break during the noontime heat: 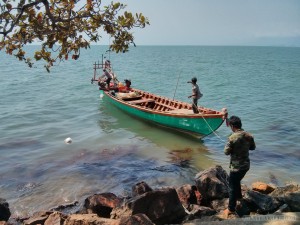 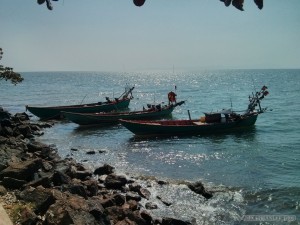 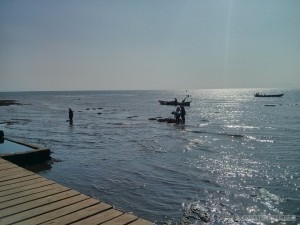 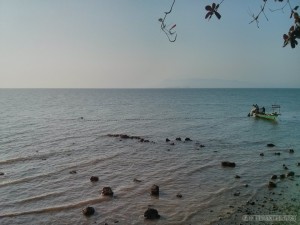 Walking around the coastline, there’s a lot of statues.
– A mermaid (naked lady) statue – the locals call it a mermaid, but I don’t see the tail. 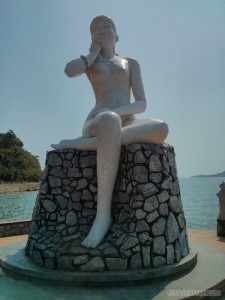 – Monkeys on a tree stump: 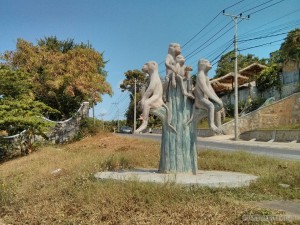 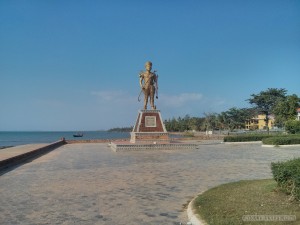 – And of course, a crab, presenting Kep’s most important product. 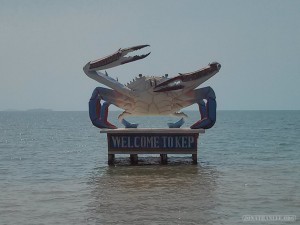 A bit more inland, you see a lot of colonial French buildings – believed to be owned by Cambodian military officials, who are waiting for increased tourism to jack up prices: 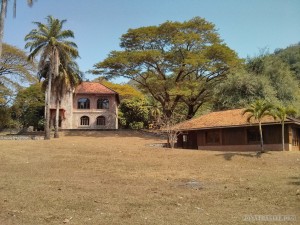 There’s also Kep National Park – a 2-3 hour hike in the forests. Unfortunately, I took a wrong turn, and ended up climbing up the staircase to heaven (through the jungle). 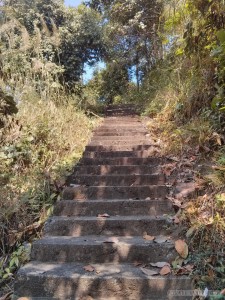 All in all, Kep is a great destination for a day trip from Kampot. 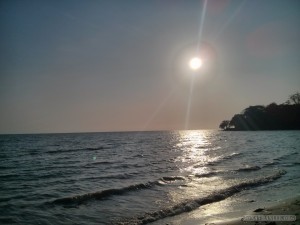